Example being when a India Blue White-Eyed female was bred to a Purple male, you could produce Purple White-Eyed females in the first mating.     What little did the late Ernie West realize when he developed the White-Eyed birds, that this pattern mutation would have such an impact on the peafowl industry.  As the years have gone by with the appearance of new color mutations through the 80's and 90's, some breeders have worked on establishing the white-eyed mutation into the newest of the color mutations that we have today.

With much hard work and patience by a few breeders over the next 10 years the white-eyed pattern is being established in the following colors, India Blue, Cameo, Charcoal, Purple, Peach, Bronze, Opal, Midnight, and Jade.

I hope this helps give a better understanding of the white-eyed peafowl mutation. 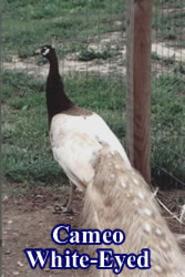 History of the White-Eyed Peafowl Mutation 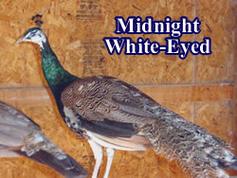 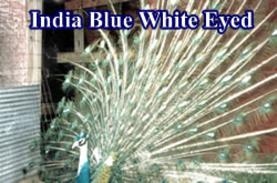 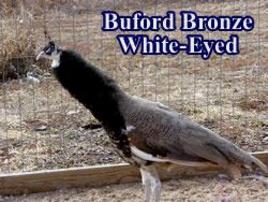 The fact is that what Ernie West came up with was almost the opposite; a India Blue bird with white eyes in the train. In the early stages of the development of these new birds they were bred to each other, which produced mostly White Eyed peafowl, with the remaining being India Blue. This new mutation was a pattern mutation not a color mutation for the color of the bird was still India Blue Over the next few years these birds were sold to other breeders across the United States. Through select breeding these birds produced numerous off spring. Most of the babies were White Eyed with some being India Blue. As some of the India Blue's matured to an older age White Eyes developed in the train. It was thought that these birds lacked the genetic qualities of the others because of their late development.

Later the White-Eyed mutation birds were bred to the India Blue Pieds to produce pied birds with white eyes in the train. With this being done by a few breeders across the United States a new variety was created, India Blue Pied White-Eyes.  Over the years this new variety was mated back to White peafowl and through many mating back to White peafowl another new variety mutated, the Silver Pied, which was in 1994. As the Silver Pied birds were mated to each other and /or India Blue Pied White-Eyes birds were mated to each other, some of the off spring would revert back to the White-Eyed peafowl. This new generation of White-Eyed peafowl seem to have more white in the throatlatch and at the end of the wing feathers as well as more lacing down the back.

The Origin of the White Eyed Peafowl occurred in the mid to late 1970's by the late Ernie West of Fortana California. These birds were India Blue in color with a graying affect throughout the wings and shoulders; the back of the bird had white lacing at the tip ends of each feather. As the cock birds matured they would remain gray throughout the body with the train having the center of each eye feather white. The females would look similar to a India Blue but with a silver gray look to the body. 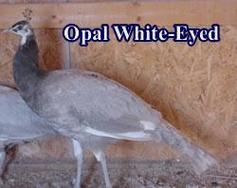