The following year 55 cochin bantam hens were kept for a brooding flock.  Metal laying nest was placed along the walls for a place for the cochin hens to lay and eventually start to set.  No eggs were picked up from these hens so that they would brood quicker.  This was within 3 to 4 weeks, by this time there were 49 hens setting.  The cochin chicken eggs were removed and replaced them with 6 fresh peafowl eggs per hen.  The bantam eggs were then candled and put in the incubator for the remainder of the incubation period.  Cochin hens would incubate the peafowl eggs for one week, and then the peafowl eggs were removed and replaced with fresh peafowl eggs.  The one-week incubated peafowl eggs were then placed in the incubator for the remainder of the incubation period.   By using this method, when we had 100 fertile eggs for one week 90 to 95 chicks would hatch.  This was an increase of 10 to 25 chicks per week from the previous year-end of season hatching.  These numbers seemed to hold true for the rest of the hatching season.  It seems that the constant rolling of eggs by the bantam hens must be very important during the first week of gestation

The humidity in the incubators stays around 50% and the temperature around 99.5.  Ever since the method of using bantam hens for starting the peafowl eggs incubation period was started, we have stayed with this idea.

We have tried different kinds of hens to set on peafowl eggs. One was using the Muscovy hens they worked very well, but seemed to be too aggressive when changing out the peafowl eggs once a week and would in turn break an egg.

Silkie bantam hens were also used, but these hens would get off for feed and water and not return to their own nest and would set with another hen.  This then left a nest uncovered.  Both the Silkie and Cochin bantam hens are very docile but for us the cochin bantam hen method works better.  This is helping us to reach our goal of hatching every fertile egg possible.

Using the cochin bantam hens does take more labor than using the incubator, but the results are worth it to us.  It is very exciting for us to see what hatches each and every week of our hatching season.

This is an outline of our incubation and hatching program that works well for us.  We hope this is helpful to you, but if you have any questions please feel to contact us. 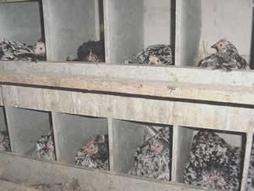 After a couple years of decreasing hatching numbers we went back to the redwood manual turning incubators.  Leahy Manufacturing Company that has since gone out of business made these redwood incubators.  These incubators are approximately 30 plus years old.  This meant that we went back to manually turning the eggs at least four times a day.  In a batch of 100 fertile eggs that had been candled at 8 days an average of 70 to 80 eggs were hatched. When our goal is to hatch as many fertile eggs as possible, these numbers did not meet our goal.  So it was decided to try something else. 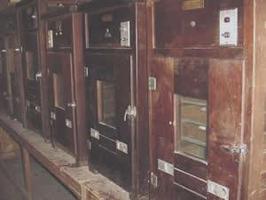 Since we also raise Cochin bantams it was decided to use them along with incubators to see if this would increase the hatching percentages. When this was decided it was toward the end of a breeding season.  There were still some broody cochin bantam hens at this time of the season that we decided to try six fresh peafowl eggs to put under each cochin hen.  The eggs were left under each hen for one week.  Then those eggs were remove from under the hens and placed in the manual turning incubator for the remainder of the incubation period.   When the eggs were removed six more fresh eggs were put in their place.  After candling the one-week-old eggs the fertile eggs hatched a much higher percentage.  The method of using the cochin hens was working very well to reach our goal.  There is something about using Mother Nature for the first week that seems to work better than using the incubator for the total incubation period.

Over the years we have raised a lot of peafowl chicks.  Several methods for incubation have been used, redwood incubators, GQF incubators, peahens, Muscovy duck hens and bantam hens.

For years redwood incubators were used with good results. These eggs were kept laying flat in the incubators with the eggs being turned manually four times a day.

The GQF automatic incubator then came along, these incubators would turn the eggs automatically so no one had to manually turn the eggs.  The eggs were stood on end and turned back and forth every two hours.  When the automatic turning incubators were used the percentage of chicks hatched seemed to go down in numbers.  What was going wrong here?  To me I think the thinner walls of the GQF did not hold a constant temperature as the redwood’s and with the eggs standing up right it did not get as enough rotation.