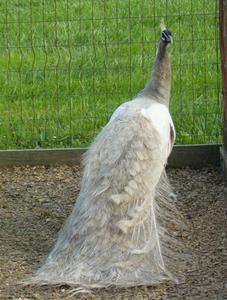 History of the Taupe Peafowl Mutation 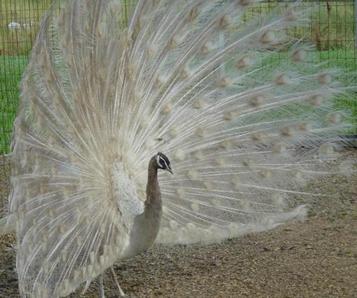 This new color was born on our farm during the summer of 2005. It was created from the breeding of an India Blue male and a Purple female.  This mating produced several chicks; out of these chicks, two appeared to be much lighter in color than the others. As the lighter colored chicks grew they both appeared to be males. The two male birds were raised in separate buildings on the farm for safety reasons to alleviate the risk of having these new color birds all in one building in case a tragedy happened.

One day during that summer, while we were away, a severe storm that had damaging winds came through our farm. Upon returning it was discovered that a door had blown off of one of the building. This building had 40 peachicks in it, and most were loose all over the farm.  All but one of the peachicks was caught, which just happened to be one of the Taupe chicks that was gone; it was never found. We felt blessed that the new colored chicks had been separated so that there was still one to be raised.

The mating of the India Blue male and Purple female did not produce any odd colored chicks the following year.

In 2007 when the Taupe male was 2 yrs old he was mated to his mother and a couple other related females. From this mating two Taupe birds were produced; a male and female.

During the 2009 breeding season, ten Taupe chicks were produced.  This was the first year that a Taupe pair was mated together, and all of these chicks hatched, were Taupe. Currently there are five breeding males and four breeding females in production. The Taupe color appears to be a simple recessive in color and not sex linked.  In the past all sex linked recessive colors have appeared first in a hen.  There doesn’t appear to be any genetic defects in this mutation as all birds are large, healthy and with good feather quality.

We presented this new color mutation “Taupe” to the 2009 UPA convention during the annual conference in Ft. Collins Colorado.

Now we are working on out crossing the Taupe color with other patterns of peafowl to make more varieties of Taupe and to keep this color mutation strong. There is much excitement at the farm each year working with these birds and watching this color mutation develop.