I’m always on the look out for rare peafowl.  So we followed the father home to their farm.

We went to the barn pen and the gentleman walked the peacock out. For a few moments I was speechless.  I had never seen a bird like this before.  The peacock had a full train that was a very unusual color.  I ask him if he had raised the bird but he said he had bought him.

Unfortunately they didn’t raise any chicks from him last year.  When asked what the bird had been bred to he told us they had two hens that look just like the cock.  He then walked the hens out of the barn.  It was hard to believe we were looking at three birds of this new color mutation.

The father went on to tell us he had gotten the birds by answering an ad in a newspaper for peafowl for sale.  When he went to that gentleman’s farm to look at them, the 80-year-old man was selling all of his birds. He had lost interest in the birds because of a stroke he had suffered and lost most of his present memory.

There is no history of the parentage of these three birds.  There appears to be some Spalding in them, as the rest of the gentleman’s birds did.

We asked the father if the birds were for sale he replied, yes. They didn’t have the time to devote to the birds, as was needed for this new color. So we bought the birds, got them in cages and started on our long journey home.

It would be interesting to know if one of them is the mutant bird or if they are all siblings and are other birds out there somewhere like them.

It was early in the breeding season when they were put into the new pen. It took awhile for them to adjust to the new surroundings. We also pen mated the cock to Black Shoulder and Silver Pied hens for outcrossing purposes. The two Jade hens laid a lot of sterile eggs, probably because of moving them during breeding season. We hatched one Jade chick and ten split chicks from the Black Shoulder and Silver Pied hens. We do feel that the mutation is a simple recessive color.

The following year we mated the birds the same way, producing more chicks. In 2002 we mated the trio of Jades and three split hens back to their father.  Also mated a split cock to the first Jade hen that is now two years old. We have produced chicks from both of these pens. More work is to be done to develop this color in other patterns. It will be interesting to watch this new color develop in the future.

History of the Jade Peafowl Mutation 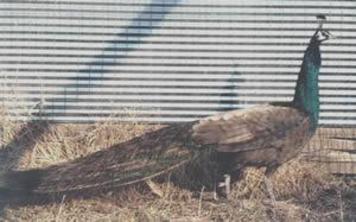 The story of finding the Jade Peafowl. Our family was at an exotic bird sale in north central Nebraska in the spring of 2000.  It was during the day after selling our birds, in mid afternoon, when a young man came up to me and had a question about a peacock.  He asks if he described the colors on his bird could I tell him what variety it was, I said sure.  By the end of the description of the bird I knew I had never seen one this color, how fascinating.  During the conversation the young man’s father also visited about the bird.  When asked if they had any pictures of this bird, they said no.  Unfortunately they lived about an hour northwest of the sale which was the opposite direction of our trip.  We were getting ready to leave for home, which was a six-hour trip when this conversation started, so we could get to work the next morning.  The father said he would take us to their farm and show us the bird.

Then I went to talk to my wife to tell her we had to go look at a bird at someone’s farm.  I told her that I knew this bird was something new and different. She asked if this was on our way home?  Well, kind of sort of and off we went in the other direction to look at this bird.  This was probably another wild bird chase to look at a normal colored peacock, but I just couldn’t let my mind rest without seeing the bird.