Near this same time around 1992 another Peach chick approximately 3months old was found at the fall Exotic Auction in Gardner, KS. This chick was in a cage with a Cameo chick.  Fred Huebner, North English IA and I found this unusual bird in which Fred purchased these two chicks. Inquiries were made to find the owner of these birds.  The owner was from somewhere in Texas.  When speaking with the owner he said the chicks were from a pair of Cameos he had bought from me a few years earlier at this same auction.  I was able to trace this pair of Cameos back to progeny from 10 Cameo peachicks that I purchased in 1980 which were out of a Cameo hen and a India Blue male split to Cameo

The following year Fred purchased the Cameo pair that had produced the Peach chick purchased at the auction and three more peach chicks hatched the current year from the gentleman in Texas.  Fred later bred the Peach hens back to their father the Cameo male. This mating produced both Peach and Cameos chicks.

It is amazing that the Peach color showed up around the same time from two parts of the country; one Peach line from the original Purple hen and the other Peach line from a pair of Cameos.

Fred also bred some of his Peach hens to a Black Shoulder male then after a couple generations Peach Black Shoulders were produced.

During the mid 1990’s I purchased some Peach birds from both Clifton and Fred which gave me two different lines for breeding. The first year the two lines were bred separately.  The following year the two separate lines were bred together to see if this mating would produce all Peach chicks, which it did.

It was thought that the Peach color mutation would be a sex link recessive, due to the color coming out of two different sex link color recessive parents the Cameo and Purple.  This theory was verified by breeding a Peach male to India Blue hens which produced all India Blue males and Peach females.

Hopefully this provides a better understanding of the beautiful Peach color mutation. 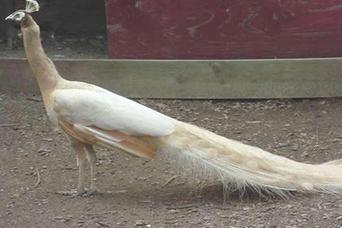 The Peach mutant first appeared in 1991 as a hen born at Roughwood Aviaries, Scottsburg, IN owned by Clifton L. Nicholson, Jr

The mother of the peach hen was the mutant Purple hen born in 1987.This first purple hen was mated to a cameo cock. This mating produced two India Blue males. These India Blue males carried both the Cameo and Purple color gene. These two cocks were mated back to their mother, the original Purple hen. This mating produced eleven peachicks which included three India Blue (2 males and 1 female), three Cameos (females), four Purples (2 males and 2 females) and one Peach (female). This was the first Peach produced.