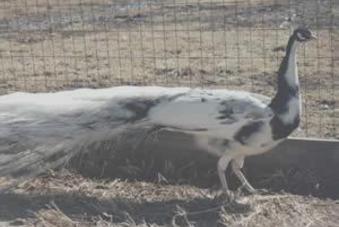 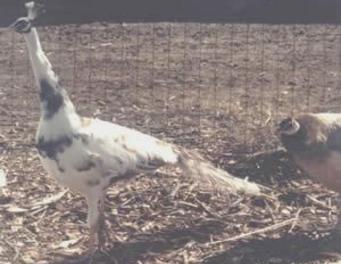 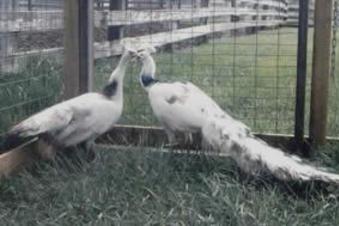 Genotypically, the Silver Pied males have White-Eyed feathers in the train. Phenotypically, the Silver Pied males can have pure White feathers in the train. This is because the White gene has mask the White-Eyed feather in the bird. Genotype is the genetic make-up of the feather. Phenotype, is the visual make-up of the feather. 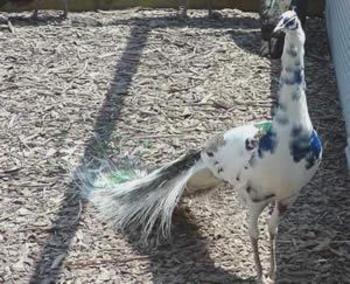 Due to the extensive work by some breeders for several years, today the

Like all pied breeding, there is varying amounts of white on the birds. Generally speaking the birds are 80% to 90% white with the other percentage being color. The mantel or top of the shoulders appear silver as the peacocks mature. The peahens are the same pattern as the males except the color on the body are silver and white. When these birds are hatched they appear white with usually a dot or two of color on the back of the head and neck area; some times a small patch of color on the back or wings. There are variances in the pattern on the chicks as well.

As with breeding any pied pattern of peafowl the ratio is 1-2-1. When breeding Silver Pied to Silver Pied you get an average of 25% white, 50 % Silver Pied, 25% Dark Pied “White-Eyed”.

It’s been 15 years since this pattern mutation came in existence. They are as popular now or even more so than in the beginning. There is more work being done to make the Silver Pied Pattern in all the new colors of peafowl. Hope this helps everyone understand the Silver Pied peafowl.

What is known today is that all three original birds trace back several generations to one bloodline, White-Eyed peafowl. The White-eyed peafowl, birds with white eyes in the train, founding breeder was Ernie West of California.

Of the three original birds, which were all males, some carried the Black Shoulder gene as well.

About 2 to 3 years later the Silver Pied pattern showed up in the Black Shoulder peafowl.

It was thought of how beautiful the Silver Pied pattern would look in other colors of peafowl such as Cameo or Purple. 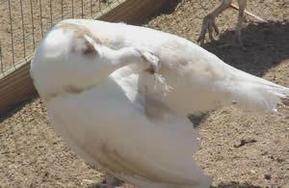