This mutant bird was found at an exotic bird sale in Kansas in October 1998.  No one knew that it was unusual except my son and myself.  After we purchased this peacock we went to the clerk’s office and ask who had checked in this lot number.

We then located this person and asked about the bird. The gentleman had bought the bird as a yearling at another sale in the spring of ’96. So this bird was born in the summer of 1995. He had mated it to a Black Shoulder unrelated hen as a 2-year-old. The pair produced two chicks in which one died and the other one was a Black Shoulder hen. In 1998 he made the same mating and produced 4 chicks. All of these birds were still at his farm. After visiting, he said he would sell all the chicks from that male so we went to the farm and purchased those birds. The reason he sold the bird was that he had bought it as a Black Shoulder and as it grew it never colored like a Black Shoulder should. The bird was always much darker with no blue in the neck but had very dark eyes in the train. Therefore he didn’t want the bird. By the spring of 1999 the four chicks had matured enough to tell there was three cocks and one hen, all black shoulders.

The year 2001 was  exciting having such a large number of daughters in production split to Midnight and also split to many other color patterns. We produced the first Midnight chicks in the “Barred-wing” pattern. 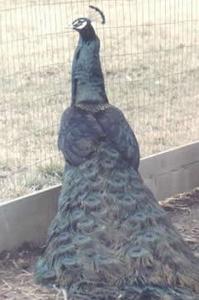 History of the Midnight Peafowl Mutation